“The projects and politics of militarism and imperialism, of racial and cultural rivalries, of monopolies, restrictions, and exclusion, which were to play the serpent to this paradise, were little more than the amusements of [a London resident’s] daily newspaper, and appeared to exercise almost no influence at all on the ordinary course of social and economic life, the internationalization of which was nearly complete in practice.”

It was the spring of 1988, about 18 months before the fall of the Berlin Wall.

I was spending a year behind the Iron Curtain at the Karl Marx University of Economics in Budapest, Hungary, on a Fulbright scholarship.

The country was cut off from the world in ways hard to imagine.

I would buy week-old editions of the International Herald Tribune every week at Budapest’s most expensive hotels just to get the baseball box scores.

I had to make appointments at the central post office to schedule a long-distance phone call to speak with my parents.

In April of that year, the big news was that McDonald’s was opening a restaurant in downtown Budapest.

An iconic brand of Western capitalism was finally penetrating the Iron Curtain.

On April 29, three friends and I stood in line to sample one of the first Big Macs ever served in a communist country.

The arrival of McDonald’s in Budapest foreshadowed the coming collapse of communism.

By the time I next returned in 1991, CNN was available in every household.

And the world had opened up in previously unimaginable ways.

The era of postwar globalization had begun.

The McDonald’s Theory of Globalization

In 1996, New York Times columnist Thomas Friedman even suggested that two countries that both had McDonald’s would never go to war.

The mere presence of McDonald’s in a country signaled the rise of a consumer society that was too comfortable to risk the chaos of war.

Soon afterward, McDonald’s announced that it was selling its 847 Russian outlets, leaving the country after more than 30 years.

And Friedman’s McDonald’s theory of globalization went up in smoke.

Today, some critics dismiss Freidman’s theory as a naïve idea born of the age of liberal-democratic triumphalism – a journalistic counterpart to Francis Fukuyama’s The End of History and the Last Man, published in 1992.

They argue that the world is deglobalizing. As a result, countries are striving to reshore manufacturing and turning inward.

Sitting in their ivory towers, these critics could not be more wrong.

Why the Decline of Globalization Is Bunk

Reading the headlines, you’d think that globalization is dead and buried.

The U.K. voting for Brexit…

Or China barring Silicon Valley’s tech giants from its market…

Each suggests that the era of globalization is over.

But look behind those headlines, and you’ll see why the critics are wrong.

No. 1: The global flow of people, ideas and goods is nothing new.

Long-distance trade in tin was common during the Bronze Age (3300 B.C. to 1200 B.C.). Archaeologists have found stone tools in the Eastern Mediterranean made of volcanic rock first quarried in Turkey. The Silk Road – the most famous ancient trade route – connected China and the ancient Roman Empire.

Globalization has been part of human societies for millennia.

No. 2: Trade statistics confirm that globalization is as strong as ever.

The value of global trade reached a record $28.5 trillion last year. That’s a 25% increase over the value in 2020. And it’s 13% higher than the pre-pandemic 2019 number. For all the talk of supply chain disruptions, global trade is alive and well.

No. 3: Globalization has penetrated our lives more than we can imagine.

Just take a look at Apple’s (Nasdaq: AAPL) iPhone supply chain in the image below. Sure, Apple may tweak its suppliers from year to year. But Apple will never build the iPhone anywhere near its headquarters in Silicon Valley. 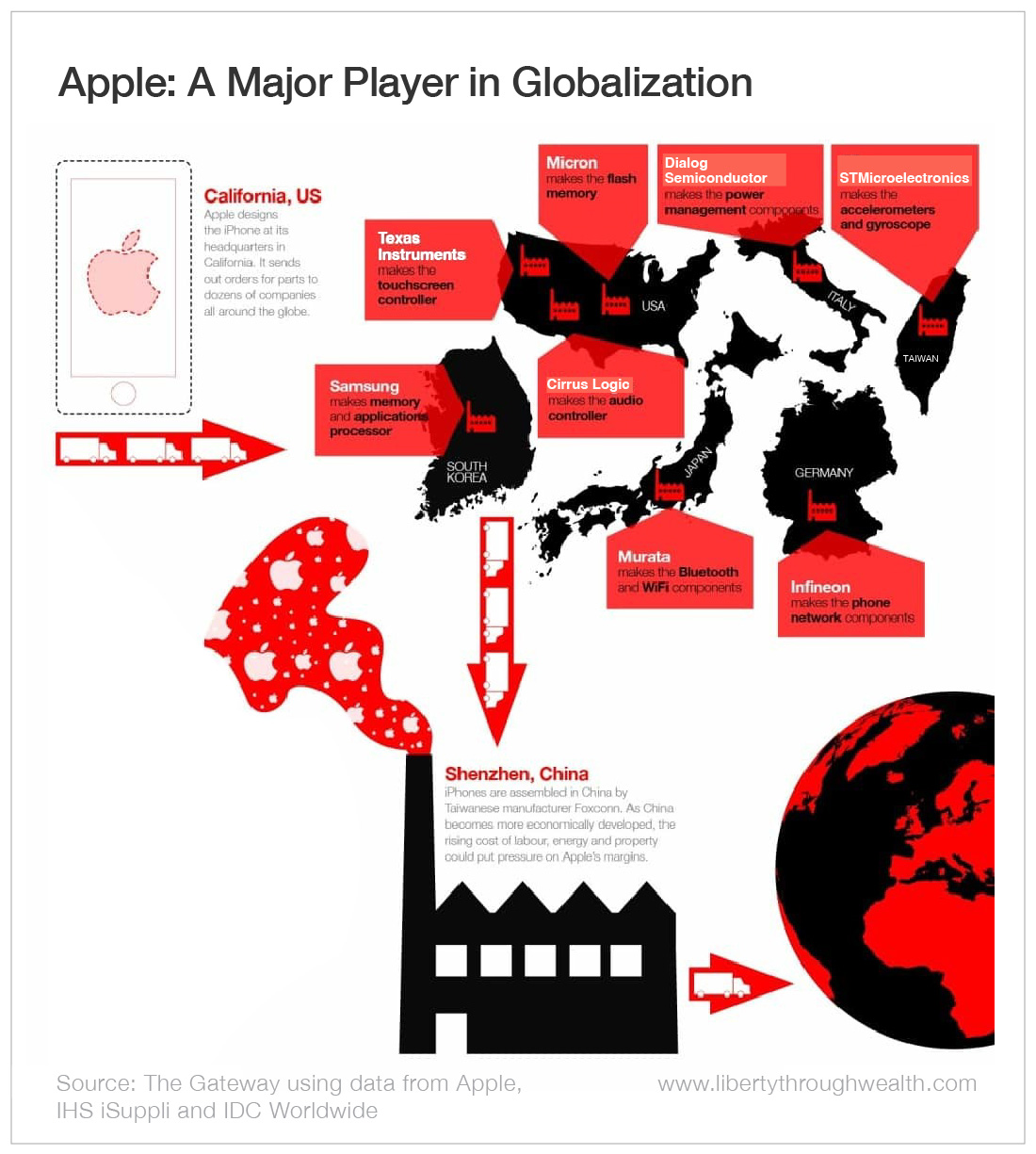 In addition, focusing purely on trade figures understates the impact of globalization.

First, trade figures fail to account for a big chunk of the global digital economy.

Today, ideas, money and work products flow across the globe at the click of a mouse.

This was unfathomable just 30 years ago.

Second, globalization is more than selling a pair of Levi’s or an iPhone abroad.

When I was studying at the Karl Marx University in the bad old days of communism, students could major in “central planning.”

They learned how to run a socialist economy with no private property from the top down.

Today, thousands of young Hungarians, many with MBAs, are working for American corporate giants like Google, Morgan Stanley and BlackRock right in the heart of Budapest.

Others trade U.S. stocks and options for a living – despite being six time zones away.

Today, I am writing this in a Starbucks in Budapest, less than 90 miles from the Ukrainian border.

Tonight, I’m taking my son to see Top Gun Maverick (in 4DX!) at a local mall.

Few Americans can find Hungary on a map.

But soon, thousands of Hungarian kids will have a new American hero – and will know that the “TOPGUN” School is in Nevada.

In short, much of the world’s day-to-day life is like that of the Londoners described in John Maynard Keynes’ quote above.

Once you’ve let the globalization genie out of the bottle, you can’t put it back in.

That’s just the way humans are wired. Sure, there will be setbacks…

World War I put a damper on globalization for a generation.

And yes, McDonald’s exited Russia after the country invaded Ukraine.

But does anyone doubt that one day McDonald’s will be back?