A New Era of Medicine – and a $100 Billion Opportunity

Note from Senior Managing Editor Christina Grieves: Today’s article comes from our friend Matthew Carr, Chief Trends Strategist of The Oxford Club. The treatment – and groundbreaking company – that he writes about today represents a new era of medicine… and a HUGE opportunity for investors.

As soon as I read Matthew’s piece, I wanted to learn as much as I could about this remarkable discovery… and the $100 billion market that it represents. Luckily, he recently released a new presentation with even more of his research on what he calls “Living Medicine.”

He’s also sharing how regular investors – folks just like you and me – can get in on the ground floor of these opportunities for life-changing gains. Click here to watch Matthew’s presentation and learn just how revolutionary this new form of treatment could be…

But those 2019 numbers were actually a bright spot. They were a 2% drop from 2018’s total and represented a victory for the mental health community. It was the first time in 20 years that suicides in the country had fallen.

The markets briefly crashed. Unemployment skyrocketed. Businesses closed for good. And tens of millions of Americans were quarantined at home.

Experts called it the “perfect storm” for suicide rates to jump. Though, thankfully, we were relieved to see the rate actually dropped for the second year in a row, down 5%.

But this is only one small piece of a looming mental health crisis – one that not only impacts the U.S. but is being felt around the globe.

Fortunately, new medicines and treatments are offering hope. And the companies offering these breakthroughs are quietly reaping the benefits.

Throughout much of human history, mental illness has been grossly misunderstood. And the so-called treatments ranged from ludicrous to barbaric.

The ancient Greek physician Hippocrates believed depression – or what he referred to as “melancholia” – was caused by an imbalance of the four bodily fluids: yellow bile, black bile, phlegm and blood. He believed too much black bile in the spleen caused depression.

To remedy this, he recommended bloodletting and baths.

Aulus Cornelius Celsus, who wrote the famed De Medicina, believed in beatings, leg-irons and starvation to treat mental illness… anything that would stir up the spirit.

In the 20th century, doctors used electroconvulsive therapy and lobotomies to treat depression.

It wasn’t until the 1950s that people noticed that the tuberculosis medication Isoniazid appeared to help some patients suffering from depression. And over the next several decades, we saw the emergence of tricyclic antidepressants (TCAs), like Anafranil, Norpramin and Tofranil, as well as selective serotonin reuptake inhibitors (SSRIs), like Celexa, Lexapro, Prozac and Paxil.

These helped millions of patients and created billions of dollars in revenue for companies.

But we’re still facing a crisis.

Depression is the leading cause of disability worldwide.

And it’s a major contributor to the overall burden of disease globally. For instance, in the U.S., the annual cost of depression is more than $200 billion. Not to mention, depression can lead to suicide. And more than 800,000 people around the world take their own lives each year.

Antidepressants and counseling help ease the symptoms of depression for many people. They can help people manage the illness and live a “normal” life. But for others, these simply don’t work.

So not only does TRD impact a person’s quality of life, but it’s also a financial burden, as there’s a constant need for tweaks.

Just in the U.S., TRD patients face medical costs two to three times those of other major depression sufferers.

But here’s the truly staggering figure: It’s estimated that almost one-third of all patients with major depressive disorder suffer from TRD.

Thankfully, there is a potential salvation for patients, as well as a massive upside for investors. And the roots of this treatment can actually be traced back further than Celsus’ De Medicina.

A New Class of Antidepressants

Going as far back as 9000 B.C., humans have been consuming “magic mushrooms.”

A little more than 8% of the U.S. population has used them, whether for spiritual trips, medical relief or recreational purposes.

The active ingredient, psilocybin – which is the engine for all the visual and auditory hallucinations – activates the serotonin receptors in the prefrontal cortex of the brain. This impacts mood, cognition and perception.

We’re on the cusp of a new era of medicine. And it’s, in part, thanks to those hallucinations.

Now, the neurotransmitters, the monoamines – dopamine, norepinephrine and serotonin – are what antidepressants target. In people with depression, these neurotransmitters are in low quantities. Besides TCAs and SSRIs, there are also serotonin-norepinephrine reuptake inhibitors (SNRIs), monoamine oxidase inhibitors and atypical antidepressants, like Wellbutrin.

SSRIs and SNRIs are the most commonly prescribed. And that’s because over the last several decades, we’ve found serotonin’s role is center stage in treating depression.

Here’s where it gets interesting…

Starting in 2016, a study from Johns Hopkins University demonstrated that patients treated with psilocybin saw an effect “about four times larger than what clinical trials have shown for traditional antidepressants on the market.”

And in October 2018, the U.S. Food and Drug Administration awarded the “Breakthrough Therapy” designation to psilocybin to treat TRD.

This was a major milestone for psilocybin and the 100 million TRD patients suffering around the globe.

And the company granted this designation was Compass Pathways (Nasdaq: CMPS).

Its COMP360 drug is currently in clinical trials, which are expected to be completed later this year.

Compass was founded in 2016 to accelerate patient access to innovative treatments, such as psilocybin. Between going public last year and around March of this year, shares of the life sciences company decimated the market.

Now, shares have hit a rough patch recently, mostly because the company’s performance is mirroring that of the AdvisorShares Pure US Cannabis ETF (NYSE: MSOS).

With Washington dragging its feet on cannabis legalization, it’s brought the broader psychedelic medicine market down with it. 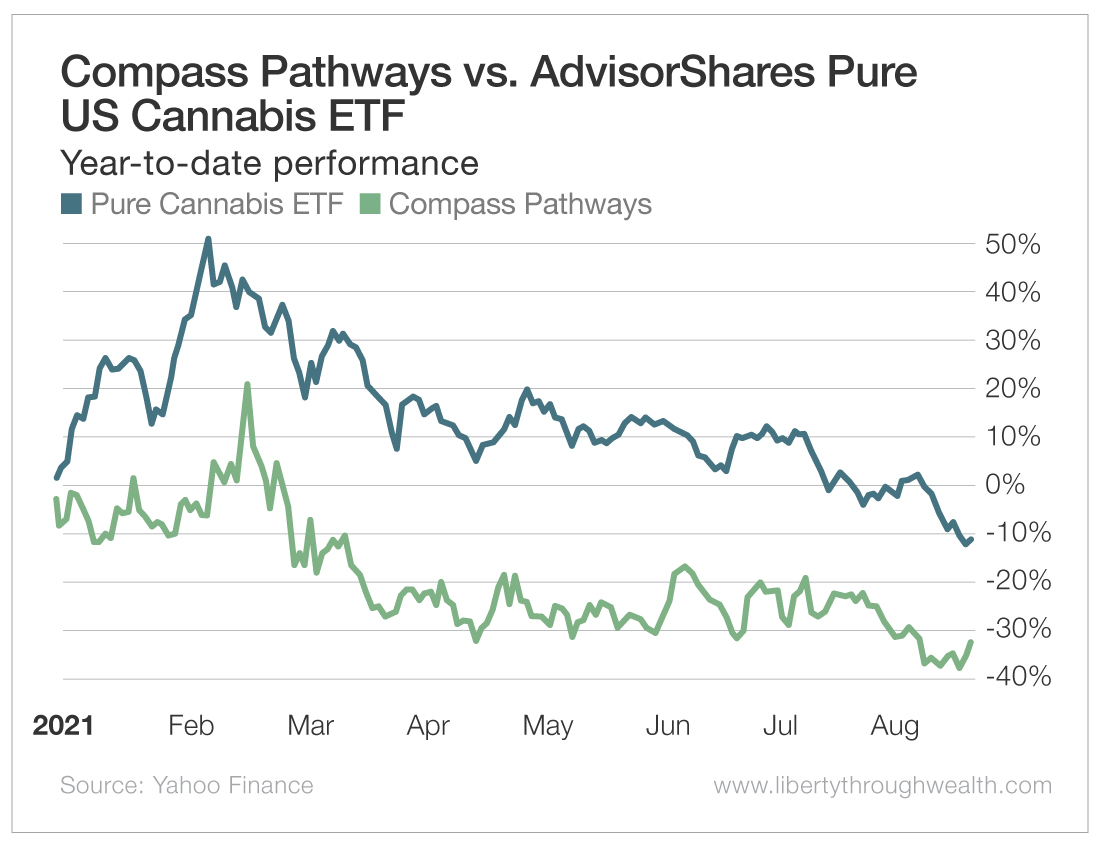 But the sector is still seeing advances and is reporting great numbers. And that makes these lows an attractive entry point.

Treatments like COMP360 could be a major turning point. And there are potentially a lot more on the horizon…

At the moment, the projected market for psilocybin and other psychedelic medicines could top $100 billion. And the push to legalize psilocybin in the U.S. and Canada has already begun.

As a trends expert, I think the psilocybin market is where cannabis was five to 10 years ago. But the upside is much different.

We’re witnessing a new class of antidepressants being born. And that could have a far larger impact than we can realistically put a price tag on.

P.S. If you’re interested in learning more about the companies that are profiting from psilocybin’s medical uses, learn how to gain access to my special reports by clicking here.

P.P.S. If you or someone you know is struggling with depression or suicidal thoughts, call the National Suicide Prevention Lifeline at 1.800.273.8255.

Rising Stocks… and the Fire Ant Theory of...

The Huge Rewards – and Growing Risks –...